Captain, Captain Solid-State, we have a (didactic) problem…

Wurtzite (ZnS) is undoubtedly one of the most important structure types. Usually this structure type is described as based on a hexagonal-densest or hexagonal-closest packing (hdp or hcp) of anions, in which half of the tetrahedral voids are occupied by the cations, specifically all tetrahedral voids of one kind, namely those which are pointing upwards with their tips (sometimes also referred as to T+ sites).

At this level of description everything is correct. However, in many textbooks and numerous other sources at the internet the illustrations of Wurtzite are wrong or at least misleading, see, for example, this illustration at the English Wikipedia site: 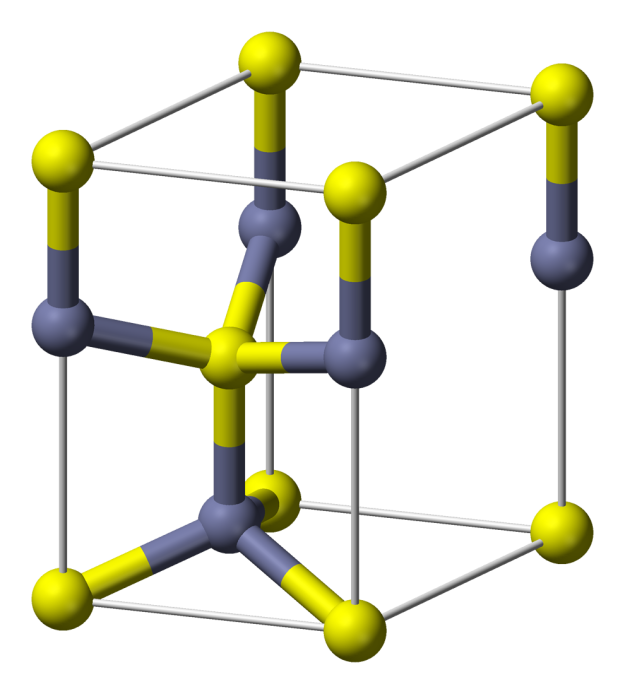 What’s wrong with this picture?

But this is at least consistent, because already many descriptions and representations of the hcp packing are wrong as soon as a unit cell is additionally shown, for example: 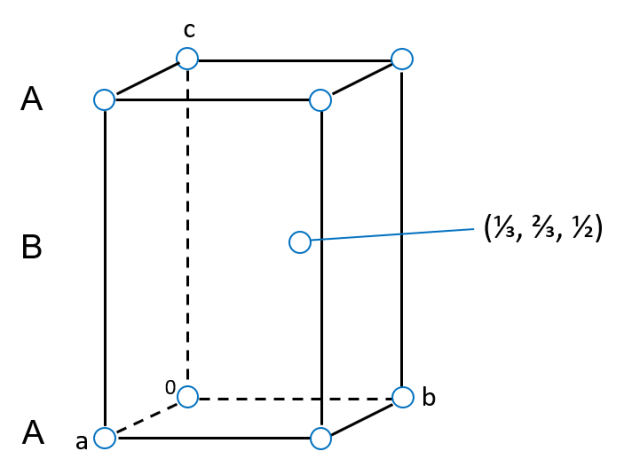 Fig. 2: A typical but at least misleading representation of the unit cell of the hcp packing.

The description to figures like the one shown in Fig. 2 usually reads as: we have a layer stacking sequence of ABAB… and the unit cell consists of two atoms, here located at (0,0,0) and (1/3, 2/3, 1/2). And a prototypical structure of this hcp arrangement is Magnesium (structure type A3).

Well, now, if the students look for real crystal structures and if they load a corresponding CIF file into a crystal structure visualization software (during my lectures I introduce to them VESTA) they will be completely confused, because they see something like that:

Fig. 3: The unit cell of the experimentally determined crystal structure of Magnesium visualized with VESTA. (BTW: a completely correct representation.)

Looking at Fig. 2, the students notice that there are also two atoms per unit cell in the cell of their CIF and if they expand the structure they will also realize that this is indeed a hexagonal layered structure with a AB-stacking, but they are still confused, because the atoms are not located at the places where they were taught the atoms should be located. And if they study the CIF they realize that only one position is specified: (1/3, 2/3, 3/4) and they read something like: okey, the space group is P63/mmc (No. 194)… Hmmm, not sure what this should mean…

If they proceed to Wurtzite and again load a CIF into VESTA, they look at something like this: 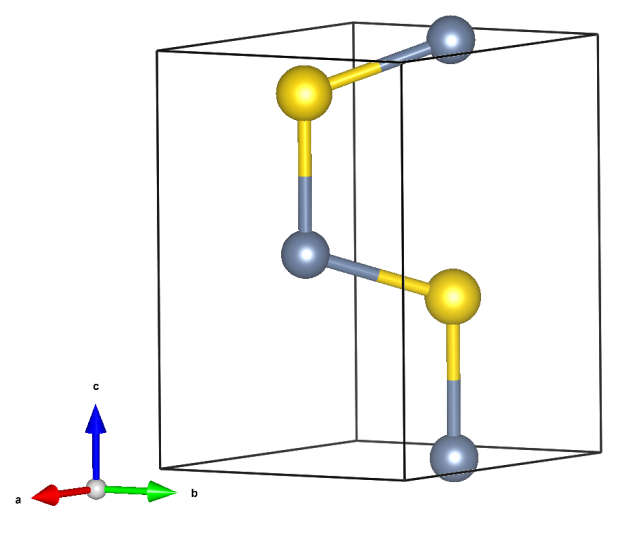 Arrgh, again there is no atom at the origin located!

The specifications are as follows:

Some of the students may begin to think that the lecturer is an idiot, probably other students will creep up on considerable self-doubts.

The more advanced students might check the diagram of the symmetry elements in the International Tables for Crystallography, Volume A. Slowly they may realize that something is wrong with the choice of the origin in Fig 1. and Fig. 2. Well that is indeed the case!

If we disregard all the glide planes, then this diagram looks like this: 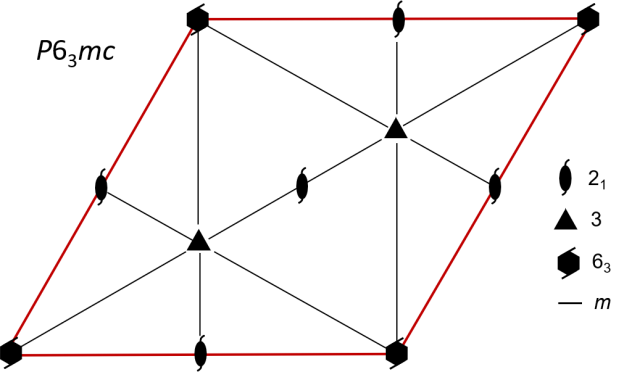 Fig. 5: The diagram of the symmetry elements of the space group P63mc, disregarding the glide planes.

The 63 screw axis is running along the c axis and through the origin! And an atom at the origin will therefore stay always on that axis! It is simply not possible to generate another, a second  position which is not located on that axis. This can be also seen by inspecting the Positions section within the Tables:

This means that we can’t put atoms at the origin (0,0,0), if we want to build a pattern, a motif that can be described by a six-fold helix-like arrangement as it is the case for both the zinc and sulfur ions!

So, and what about the tetrahedral coordination environment of the ions? How can we fit these tetrahedra with their three-fold axis into this cell? Ah! There is only one proper location: the tip of the tetrahedron and its center have to be located on a three-fold axis of the unit cell! This is the case if they are located at Wyckoff position 2b:

In the figure below the three-fold axes of rotation are shown in orange: 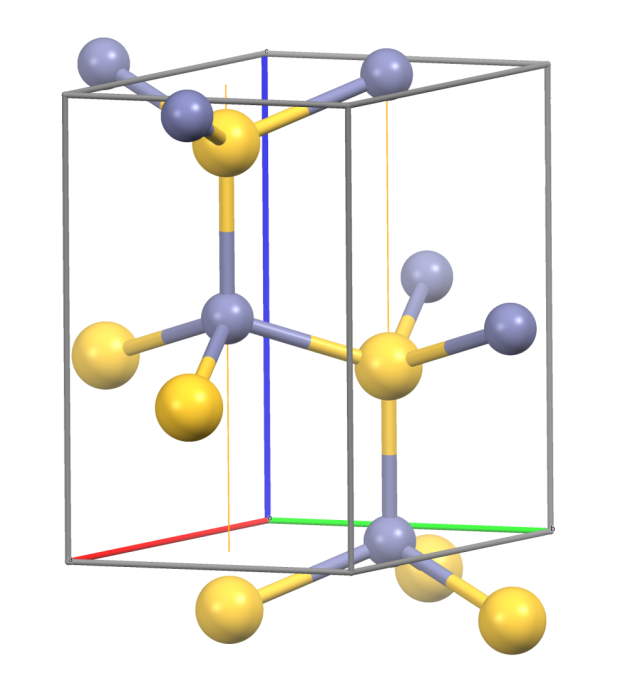 Fig. 6: The slightly extended unit cell of Wurtzite as determined experimentally by X-ray diffraction, visualized with Mercury (by CCDC) (yellow: sulfur, blue-gray: zink); the three-fold axes are shown as thin orange lines, running through the tips and centers of the ZnS4 tetrahedra.

This means, we are free to choose the fractional coordinate along the c axis (and if this is the case then it is common practice to choose z = 0 – compare the location of the zinc ion in Fig. 6) as it is, but with respect to the a and b axis we have no degree of freedom!

Well, you could say, don’t be such a quibbler! The unit cell in these misleading pictures is only shifted by 1/3 and 2/3 in the a and b direction, respectively – come on!

Yes, but aren’t there thoughtful conventions how to choose the origin of a unit cell? A unit cell is not a thing that can be considered completely detached from the locations of symmetry elements within the unit cell. And why should we confuse the students in the way that I have sketched?

The mother of all problems…

…starts well before structure types are discussed. It usually begins with the nuisance that the primitive hexagonal unit cell is wrongly depicted, because it is frequently extended by a certain amount in order to show the hexagonal environment, the six-fold rotational symmetry of the underlying lattice – probably good intention, but bad consequences! Such a sketch of an extended unit cell is shown in Fig. 7: 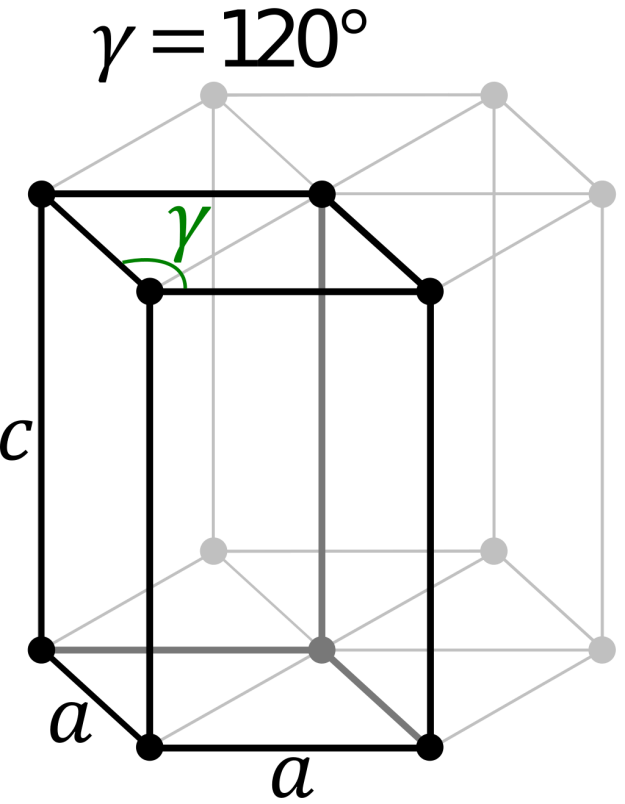 If I present such a picture to my students, approximately 80 – 90 % of them think that these are 3 unit cells (in fact Fig. 7 shows 2 whole unit cells plus 2 times a half unit cell), although they actually know everything about the translation principle of unit cells and the fact that it is forbidden to rotate them around…  To be a little provocative, I could also ask, how many teachers think that Fig. 7 shows 3 unit cells…

1. A radical sanction would be to scrap all misleading representations. Well, this is probably not possible. It is interesting to note that in many areas the way in which knowledge is spread has a certain tradition that is hard to clean up, although almost all lecturers must have made the same experience with these contradictions and struggling students.

2. Crystallography and solid-state chemistry is hard to teach in a consistent way; in a way in which you can gradually build-up the knowledge without referring at some points to anything that cannot yet be understood. But I would recommend to teach solid-state chemistry only when the students have gained a significant level of knowledge in the field of symmetry of solids/crystals. In my opinion it is advisable to introduce first all about the conventions of choosing unit cells in a reasonable way, then to teach how to read the International Tables (what is a space group, how to read the diagram of the symmetry elements, the general position diagram, what is the systematic behind general and special positions, how to understand multiplicities and Wyckoff positions) and then to turn slowly to real structures but always in conjunction with the underlying symmetry specification of the respective space group.

This can be best done with the software Mercury, which is the only software that is able to visually overlay the structure with the symmetry elements – superb! See also Fig. 6!

3. There a few positive exceptions, in which you can find exclusively correct descriptions of structure types, for instance in the book Inorganic Structural Chemistry by Prof. Dr. Ulrich Müller, John Wiley & Sons, 2009, 2nd Edition,

4. My mentor Prof. Dr. Ulrich Behrens occasionally quoted a former colleague with the statement that the hexagonal and trigonal crystal system was invented by the devil – probably he is right.

PS: I would like to thank @ZeoliteMiFi for helpful discussions