Recently, I have been immersed in the vast world of intermetallic phases, in particular those with an ordered superstructure of either cubic-closest packed (ccp) or body-centred cubic (bcc) parent structure. They caught my interest, because some of the researchers in that field are paying particular attention to how the densest-packed layers/planes look like and how they are organized, i.e., in which direction they are stacked and if they build an cubic (ABC…) or hexagonal (AB…) stacking sequence. They also partly give network-like descriptions of the atomic configurations of the densest layers.

Since densest layers are considered, one enters the field of circle packings. And the densest circle packing of equally sized circles is, of course, the hexagonal packing. If we draw lines from each circle midpoint to every midpoint of the next-neighboring circles, we get the well known hxl net, a uninodal 6-c net. The vertex symbol is 36.

In those densest layers of ordered alloys the atoms within one densest plane are of different kind. If we ignore this – as it is usually the case, when we analyze the topology of an atomic arrangement – then we obtain again the hxl net. But what happens, if we focus only on a subnet, for instance, the net that is built by the major component?

Let’s look at an example.

In the ordered binary intermetallic phase Cu3Au (space group Pm-3m), the Cu atoms in the densest layers, (111) planes, form a continous net as shown in Fig. 1, in which the Au atoms are a kind of decoration, located in the centres of the hexagons. The Cu subnet is the well-known, again a uninodal net, the kagome net kgm. The vertex symbol is 3.6.3.6. 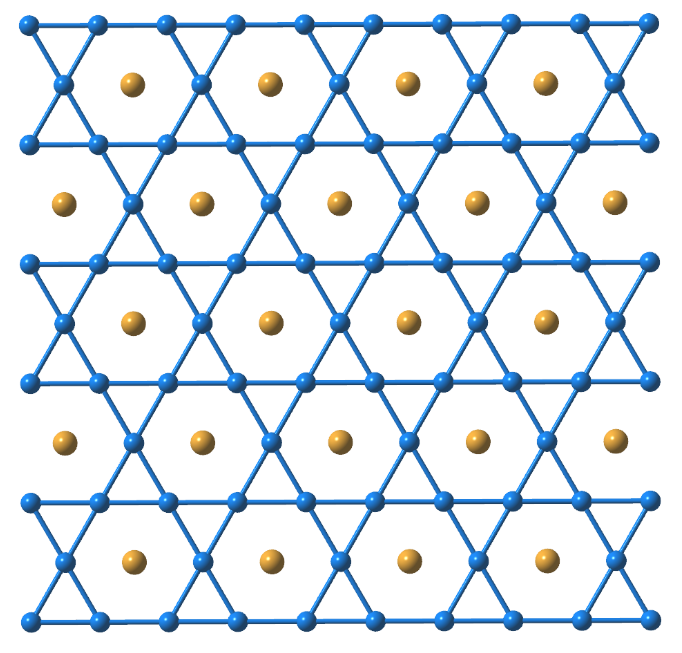 Fig. 1: Kagome net of Cu atoms in the densest layers of Cu3Au, decorated by Au atoms.

Two different binodal nets based on circle packings are realized in the subnets of densest layers in TiAl3 and MoNi4, respectively, shown in Fig. 2 and 3. In TiAl3 the Al atoms form a bew net, and the Ni atoms in MoNi4 form a krh net. The vertex symbols are given in the figures.

Fig. 2: The subnet formed by Al atoms in the binary intermetallic phase TiAl3.

Fig. 3: The subnet formed by Ni atoms in the binary intermetallic phase MoNi4.

Probably, it is hard to find a new uninodal or binodal net that is based on circle packings as it is believed that the RCSR contains all uninodal and binodal (stable) circle packings. In stable circle packings all tiles are strictly convex (angles between adjacent edges < 180°).

But on the other hand, this also means that one or the other higher-nodal net based on circle packings can still be discovered. Indeed, it turned out that the trinodal net that is formed by the Al atoms (see Fig. 4) in the ordered intermetallic phase ZrAl3 is a hitherto unrecognized net, which, of course, is only due to the fact that no one has cared about it yet.

Fig. 4: The subnet of Al atoms in the binary intermetallic phase ZrAl3.

Who knows if there are more undiscovered networks when looking at densest layers of further intermetallic phases. Maybe there is even a previously undiscovered binodal one 🙂

PS: I would like thank Davide Proserpio for confirming that this a new net by carrying out an appropriate analysis with ToposPro, and I would like to thank Michael Fischer for the inspiring exchange we had concerning this topic.

Michael Fischer, known as @ZeoliteMiFi on twitter, created a mock .cif file that allows visualisation of the periodic table in a structure visualisation software like VESTA. With that, one can see at one glance how different elements are shown.

He kindly provided the CIF and you can download it here. May be reused for all purposes, but no warranty is given. Comments and corrections should be send to: michael.fischer@uni-bremen.de.

This should work equally well with other software packages. The main issue might be an artificial generation of “bonds” between neighbouring elements that one should suppress in the settings (which is straightforward in VESTA).

This is how it looks in Mercury applying the “Ball-and-Stick” style (bond radius set to zero):